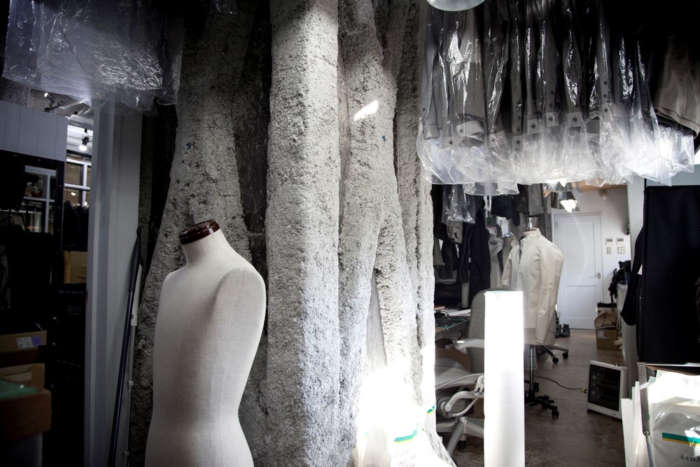 The Devoa Atelier and store is located in Hachimanyama : a small, suburban residential town located some 30 minutes by train away from the main Tokyo hubs of Shinjuku and Shibuya.
Cozy and provincial as it may first appear, the town does offer an extremely beautiful park and some remarkable modern building design for those who take the time to discover it. In many ways it represents a more real and gritty Tokyo, far away from the globalist sameness of the more trendy areas. A real mixture and melting pot of Japanese life. The fact that designer Daisuke Nishida decided to base his brand here rather than in one of the typical, squeaky clean, trendy fashion areas says a lot about the man, his label and his approach to life.
The building itself functions as his office, studio, store-room and also retail space for those dedicated enough to make the pilgrimage to come and see him. This is not some slick, stripped-down, minimalist showroom however, but a space packed with a dense array of objects : massive swathes of fabric, rows of beautifully tailored garments and inspirational totems collected by the Designer which are both functional and purely aesthetic in nature.
In this portrait of the atelier through pictures of the space and the fetishistic items arrayed in it we seek to begin to attempt to show what makes and motivates both the man and his label. 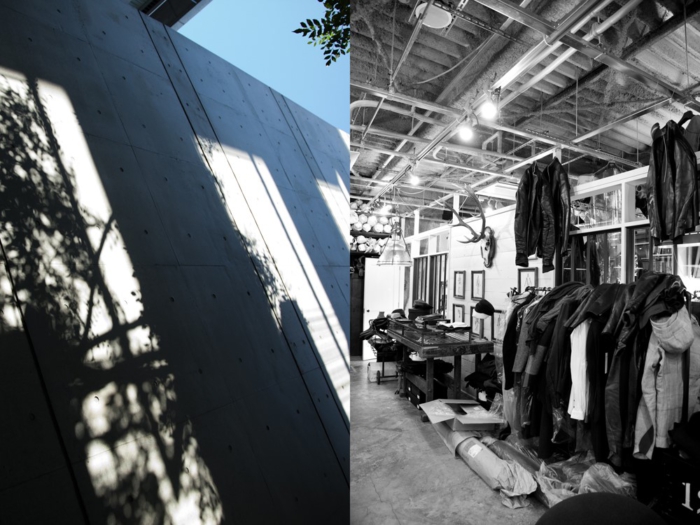 On the Left  : Hachimanyama exterior

On the Right : Interior shot of the Devoa Atelier 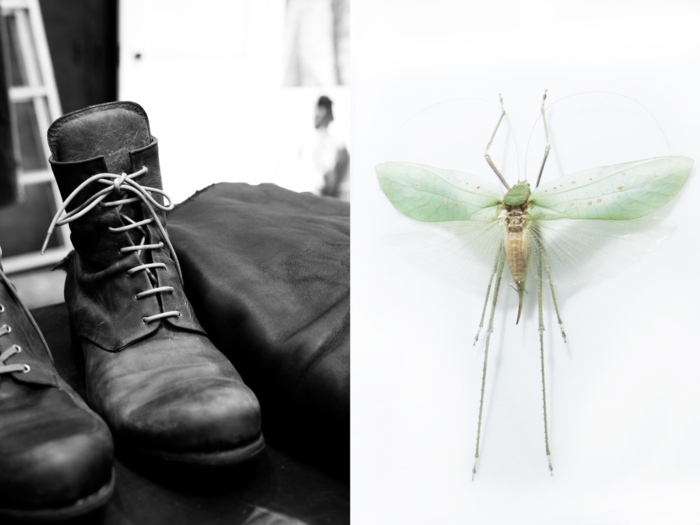 On the Left : Devoa boots from the S/S 2016 Collection

On the Right : One of a series of mounted insect samples which Daisuke has collected over the years. He is inspired by all creatures and especially insects. The reason being the proportions of and balance which creates an extended and elongated silhouette which he has often incorporated into his design and garments. 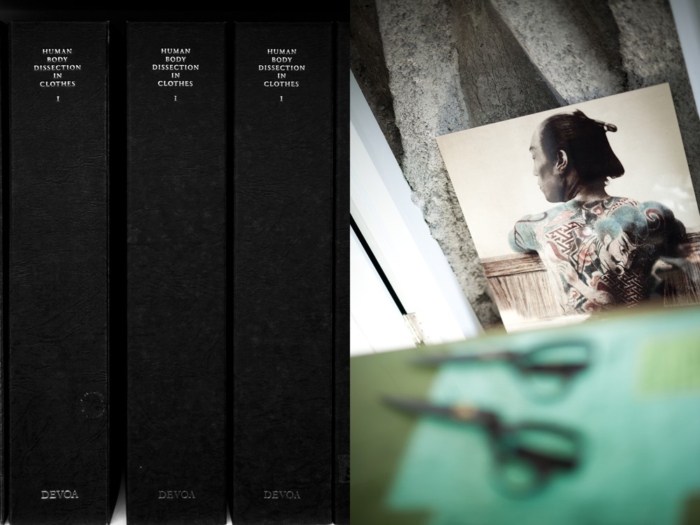 On the Left : “Human Body Dissection In Clothes”, a shirt box (circa 2009 and used for 2 seasons) designed in the shape of a hefty philosophical publication. The idea behind this elaborate packaging being that the philosophy of the Designer and the Label was “written” into the design of the clothing and so wearing the shirt in the box would be the physical equivalent of reading the same from a book. A practical, physical message rather than a purely intellectual one. An idea possibly stemming from the Designer’s long involvement and study of physical health and anatomy.

On the Right : Shot of the entrance to the design room with cutting desk. 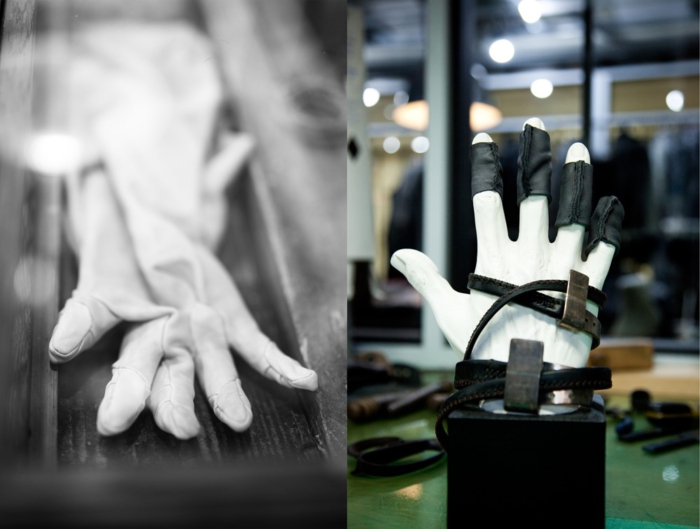 On the Left : Glove Prototype
In most areas the Designer tries to stay hands on, with a direct connection to the process of the creation of all the designs coming from the label, rather than purely designing and then commissioning a factory to produce what he has drawn. When he began to create gloves he started from scratch by stitching leather directly onto his own hand and creating this prototype piece which he still keeps around. The reindeer leather from Sweden that he selected was used because of its raw softness which makes it easier to manipulate for this purpose.

On the Right : Leather finger protectors plus wrist straps.
What at first appeared to be some kind of fetishistic design object actually reveals itself to be a collection of practical and useful tools to protect the fingers when working with the thick, strong thread needed when creating sewn leather items such as wallets and bags etc. for prototypes, research or general sale. The Designer made these for himself and they were never made commercially available unlike the leather and metal wrist “bracelets” below. 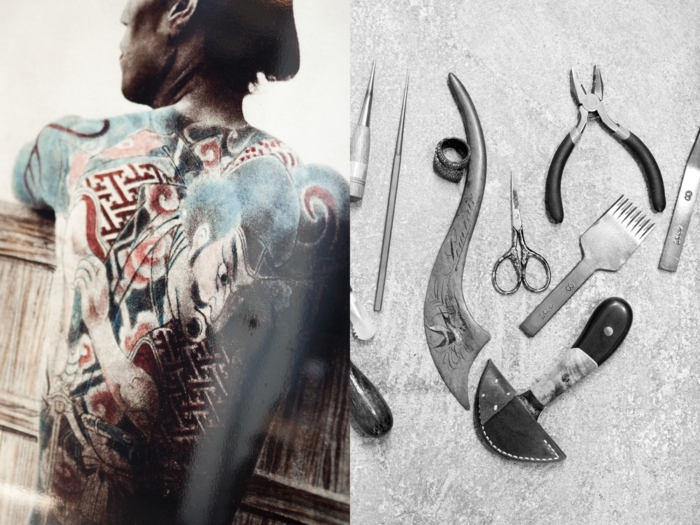 On the Left : “PAYSAN TATOUE” – Photographic print by Kusakabe Kimbei (1875)
Perhaps one of the most striking images to be seen in the Atelier is this limited edition print of what would have been in Japan quite a taboo image of a nameless tattooed “yakuza”.
The print was actually bought in Paris and one of the things that the Designer likes about this famous photographer’s work is that although he shot very Japanese subjects he did so with an almost foreign perspective on them which made them fresh and new. What really inspires the Designer in this print however are the colors and patterns made by the uniquely Japanese tattoo style.

On the Right : Various Artisanal Tools
The Designer is a lover of craft and artisanship and so he has not only collected an impressive array of tools but also a large group of people and places where techniques and craft are still surviving today. Unfortunately these people and places are aging and may soon disappear without heirs to the craft to replace them. Amongst the many and varied tools being used on the days we visited were ones from both the UK and France as well as Japan. Some of them are antique and some were made especially for him to work with leather. The long, needle-like instrument is actually created for use in oil-painting but is used by the Designer to scratch delicate lines onto leather pieces. The beautiful, curved wooden paper knife is used for smoothing down rough leather edges. Often the Designer prefers to use these antique, second-hand pieces that have been pre-owned and used by fellow artisans as he feels that this use conditions them and makes them easier to handle and more fit for purpose. 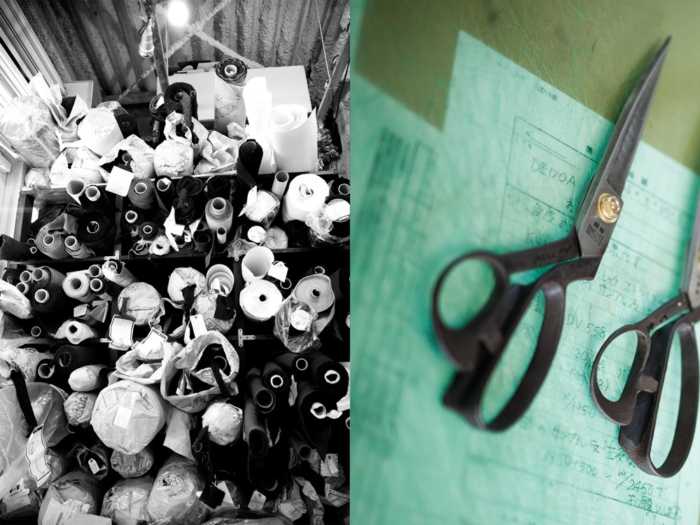 On the Left : Bolts of cloth

On The Right : Scissors
Although an imposing physical presence Daisuke is also a kind, sensitive and occasionally sentimental person, a fact that his adoption of his grandfather’s 50 year old scissors might suggest. However even though his grandfather was a tailor back in Nagasaki, Kyushu Daisuke does not feel particularly influenced by him. Rather he feels just as much influence from his mother who was an expert in the Japanese arts of Ikebana, Tea Ceremony and Kimono as from grandfather’s western designs. Nevertheless, the scissors have been polished and are used on a daily basis by the Designer. 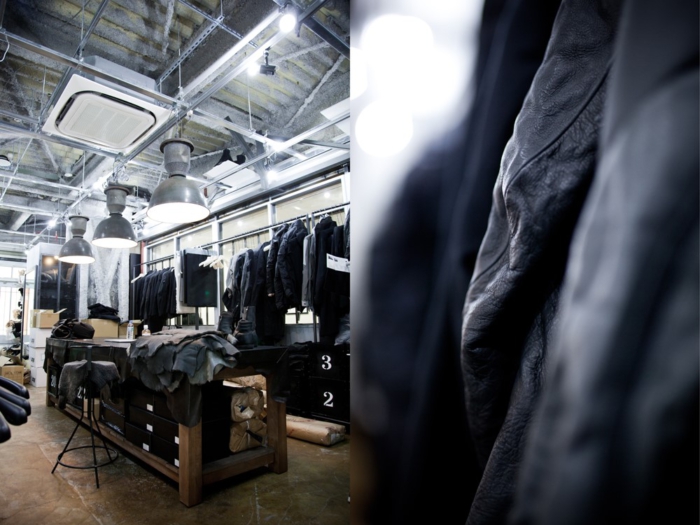 On The Left : Inside View of the Atelier
The space was co-created by the Designer himself and includes antique pieces such as the lamps imported from Paris and order-made pieces such as the huge table which dominates the space and covered with three hides of calf leather to protect it. The numbered boxes in the back were created to transport and store the recent S/S collection and fit in with its increasingly militaristic feel.

On the Right : Leathers 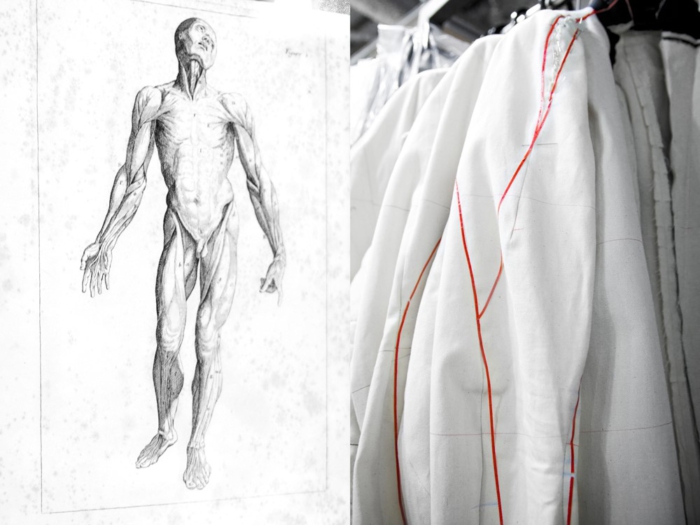 On the Left : Anatomical Print – Andreas Vesalius ( 1500s )
Anyone familiar with the Designer and his work will know of his dedication to the study of anatomy and its impact on his design and would therefore not be surprised to see this print and others adorning the walls. Similar to some of the sketches of Da Vinci this is actually the work of one of Daisuke’s true heroes : Andreas Vesalius.
For the Designer, Vesalius was not only one of the very first anatomical surgeons and the founder of modern human anatomy but was also an artist who would sometimes redesign the human body and seek to improve it in his pictures. He was a maverick and outsider who went up against the establishment of his day. In a similar spirit Daisuke seeks to redesign the look of human anatomy through his clothing : lengthening silhouette, creating better balance etc

On the Right : Rows of prototype designs showing lines referring to the location of anatomical features of the body. 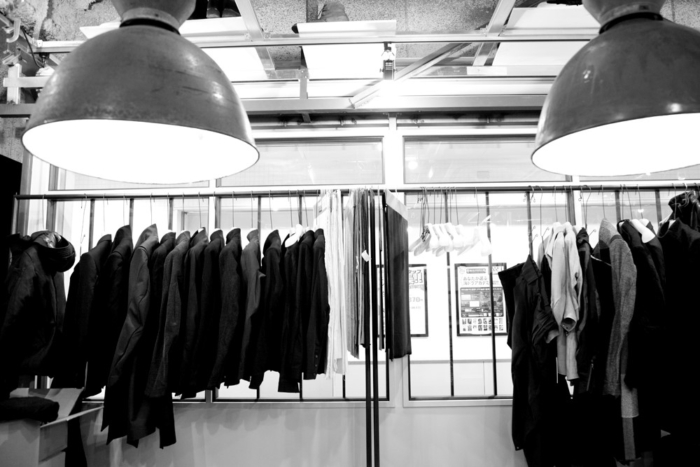